We hand deliver our puppies to their new owners. 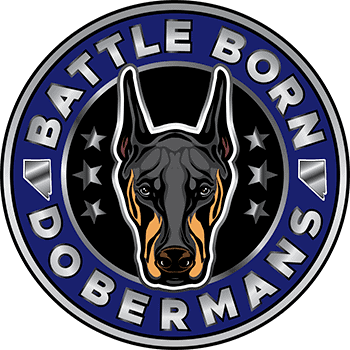 Is a Doberman a good choice for everyone?

The short answer is no. For example, they’re not a brilliant choice for first-time owners, and Doberman require a firm and confident owner who has the dedication needed to train them properly. Similarly, the breed needs plenty of exercise, which you need to be willing to commit to. Doberman also need lots of attention so won’t suit owners who work long hours. However, if you’ve done enough research and can make these commitments, a Doberman will be a fantastic pet.

Generally, Doberman aren’t an aggressive breed, although they do make a brilliant choice as a guard dog. The difference is that this behavior is trained and the dogs are taught to bring out their innate protecting instinct. The fact that Doberman make great family pets and are good around children shows that they’re not considered an aggressive breed.

How much do Doberman cost?

Realistically, this will depend on many factors, including your location and the dog’s pedigree. Doberman can cost anywhere from $1,000 and up, but from for a puppy from a reputable breeder, don’t expect to pay around $1,500. Again, this can vary wildly, so do plenty of research to find out general figures, and then decide what your budget will be.

Do you have to get a Doberman’s ears cropped?

Cropping a Doberman’s ears isn’t done for looks; it can actually be beneficial for the dog’s health, such as reducing the risk of ear infection. However, it’s not necessary, so don’t feel obliged to get it done. If you do though, make sure you go to a reputable professional. The breeder you bought your Doberman off can likely point you in the right direction.

Are Doberman suitable for apartments?

No, Doberman isn’t a suitable breed for apartments. The main issue is of course their size, and even large apartments will notice a Doberman. Also, there’s the breed’s exercise needs, and while they shouldn’t live outside, they do enjoy spending time outdoors. Many breeders or adoption centers won’t let a Doberman go to an apartment, and this is likely something they’ll check with you early in the process.

Are Doberman suitable to have around children?

Doberman are known to form strong bonds with children, and make a great family pet when raised properly. Obedience training and proper socialization is a must if you want to have a Doberman around children, but the same goes for teaching your children how to behave properly around the dog. Remember though, Doberman are a larger breed and puppies have a tendency to forget how big they actually are.

Does a Doberman get along with other animals?

While the answer to this question will vary depending on the individual dog, as a general rule Doberman will get along with most other pets. It’s crucial to begin socialization with other animals early, so take your Doberman to training classes and let them meet other animals whenever possible. Expect them to try and chase the cat at least once, particularly a young Doberman. However, owners should be aware around small pets, particularly while the dog is young, and care should be taken not to leave the dog unattended until it’s been properly trained.

Should you get more than one Doberman puppy?

Doberman are social dogs, but this can be the problem when they’re young. During service training, some Doberman were seen to develop something called “littermate syndrome.” This is when two dogs were raised together, not necessarily from the same litter, and they formed strong bonds that affected their relationships with humans, and thereby their training. Wait at least 6 months before adopting another puppy, but if you already have older dogs that will be fine.

Are Doberman prone to any health conditions?

As a general rule, Dobermans are a healthy breed. However, like most purebred dogs they do suffer from some hereditary conditions. The most common ones include heart problems, thyroid problems, and hip dysplasia, among others. The most important thing to know is that breeders screen their stock for these conditions and breed selectively to reduce the risk of them occurring. Reputable breeders will give you all of this information during the process of adoption, allowing you to make an informed decision. Similarly, it’s worth doing more research on the subject before you consider the breed.

Should you adopt a Doberman from a breeder or a rescue home?

This is obviously completely up to you and should be based on well-informed research and an assessment of your needs. For example, if you get a Doberman from a breeder, you’ll have a higher chance of a healthy dog, and you’ll know where you stand. Whereas if you go to a rescue home, you’ll get chance to rehome a dog, but many can be prone to issues around people or other animals due to their previous experiences. The important thing is to look into available breeders in your area, make sure they have a good reputation, and then make a decision.

Do male Doberman have problems with other male dogs?

Are Doberman suitable as guard dogs?

Doberman are a well known for their role as a guard dog, and are a common site in military and police roles. As a result, they do make a good choice as a guard dog for your home, but should be trained properly. You can have a test called a Working Aptitude Evaluation performed on the dog, and this will tell you whether they’re suitable for working purposes. However, if you want a Doberman to protect your home, this is definitely something they’ll do, but don’t make it the only reason you’re adopting one.

We hand deliver our puppies to their new owners.